Vali Chandrasekaran has made a name for himself as a writer on popular comedy television shows like 30 Rock and Modern Family. He’s wanted to write a comic for much of his life partly because of the intense freedom comic book creators have compared to other mediums.

“You just put your comic out into the world. It’s just what you want to make,” Chandrasekaran said. “You don’t need to convince other people… to raise the money to shoot a $500,000 or million dollar independent movie. I like how when you go to a comic store how weird it is.”

With France-based artist Jun-Pierre Shiozawa, Chandrasekaran decided to self-publish a comic called Genius Animals?, a comedy about a woman who gets wrapped up in a massive, genius-animals-related conspiracy after her boyfriend mysteriously disappears.

Chandrasekaran, based in Los Angeles, and Shiozawa, who primarily paints and leads art workshops, have been releasing chapters of the comic every week, with the final, eighth chapter slated to release online on Aug. 11. Every chapter of the comic can be accessed for free on the comic’s dedicated website, geniusanimals.net.

Chandrasekaran’s wife took a semester off when she attended college and completed an art school program in Greece, where she met Shiozawa, a fellow classmate of hers. Later, Shiozawa set up a landscape travel painting class in Ireland that Chandrasekaran and his wife decided to attend.

“I learned a lot, and it was really fun,” Chandrasekaran said. “It was a small class, maybe ten students, and we got to know each other since then.”

Later, Chandrasekaran noticed Shiozawa created comics about his parents during Inktober, a worldwide challenge encouraging artists to draw every day. These comics struck him as particularly beautiful and touching. He decided to reach out to Shiozawa wanting to collaborate on something, which eventually became Genius Animals?.

“It was only about a week when we were in Ireland,” Shiozawa said. “I just remembered, we were hanging out. We were painting together, and I remember how funny and sharp Vali was, so I was like, okay, this could be really interesting.”

Genius Animals? follows Alexandra, a video editor who falls for a guy named Todd after meeting him at a bar in the comic’s first chapter. Soon enough, Todd disappears and Alexandra, along with her friend Finnegan, who works for the Department of Health and Mental Hygiene, are thrown into a wacky quest to figure out what happened. 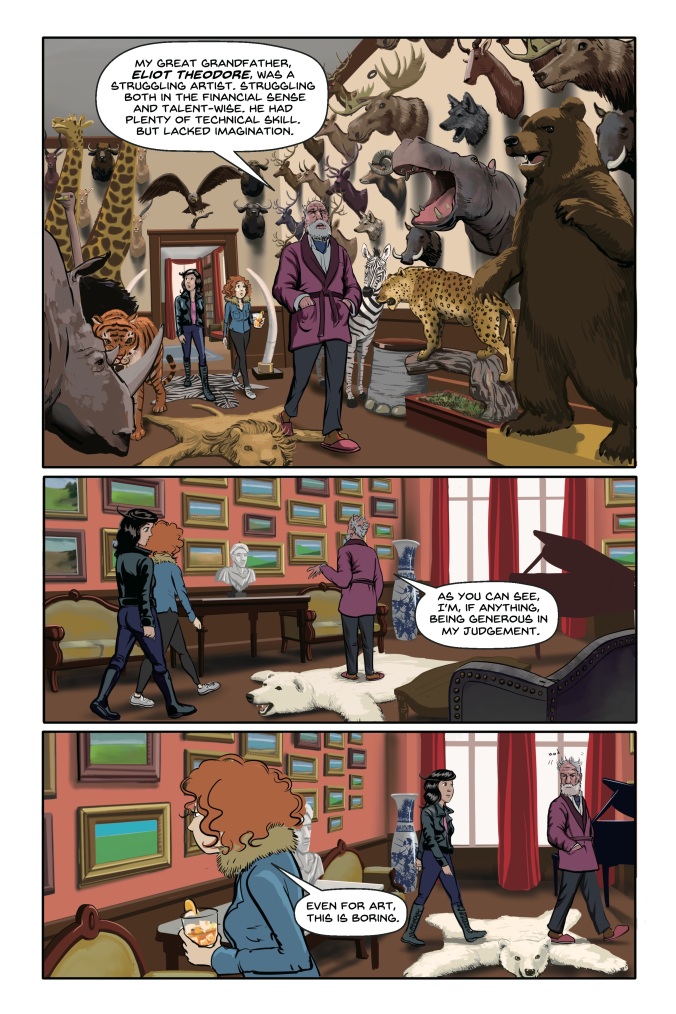 Chandrasekaran peppered his script with witty, goofy lines of dialogue. In the first chapter, Alexandra’s friend chides her for not wanting to leave the bar after talking with a less-than-alluring guy there. Her friend asks if she is engaging in some sort of “year of saying ‘yes’ thing.”

“First of all,” Alexandra says in response, “theme years get a bad rap. There’s some evidence Lincoln was in the middle of a ‘year of saying yes’ when he freed the slaves.”

Chandrasekaran also dabbled in more existential themes in the comic.

“I was obsessed with our need for narrative,” Chandrasekaran said. “Why do we need a narrative in order to make sense of the world, when a lot of times, doesn’t it seem more likely that a couple things that are happening are accidents, and they’re just coincidences, and they’re just happening for random reasons that don’t have a lot of meaning to them?”

Shiozawa’s digital artwork features lots of vibrant, wonderful colors, especially wonderful looking in the first chapter’s bar filled with purples and pinks. Stylistically, his artwork in Genius Animals? looks a bit like that of Fiona Staples. His characters have lively expressions and move elegantly from panel to panel.

The two originally figured they would try to get their comic published through a small publisher but decided against it when the pandemic hit. They’re new to the comics publishing world and didn’t know a lot about how to go about getting comics out to people.

“We thought, everybody’s home right now anyway, we are going insane ourselves,” Chandrasekaran said, “so we can just sit here tapping our fingernails wondering when the book will come out and what the publicity will look like for new artists then, or we can try something different.”

It’s been getting a good response. Both said that friends and peers of there’s have been keeping up with the comic, something they don’t imagine they would all be doing if it wasn’t online and free. Chandrasekaran has had fellow comedy writers for shows like The Simpsons telling him they’re following it, which makes him happy.

Working on Genius Animals? taught Chandrasekaran a lot about the process, he said. At first, he didn’t know how to approach writing a comic book script.

“I did it all wrong, because I didn’t know what I was doing… I just wrote a script, and it was just a movie script,” Chandrasekaran said. “I didn’t even know that when you write comics, you’re supposed to break it up into panels.” 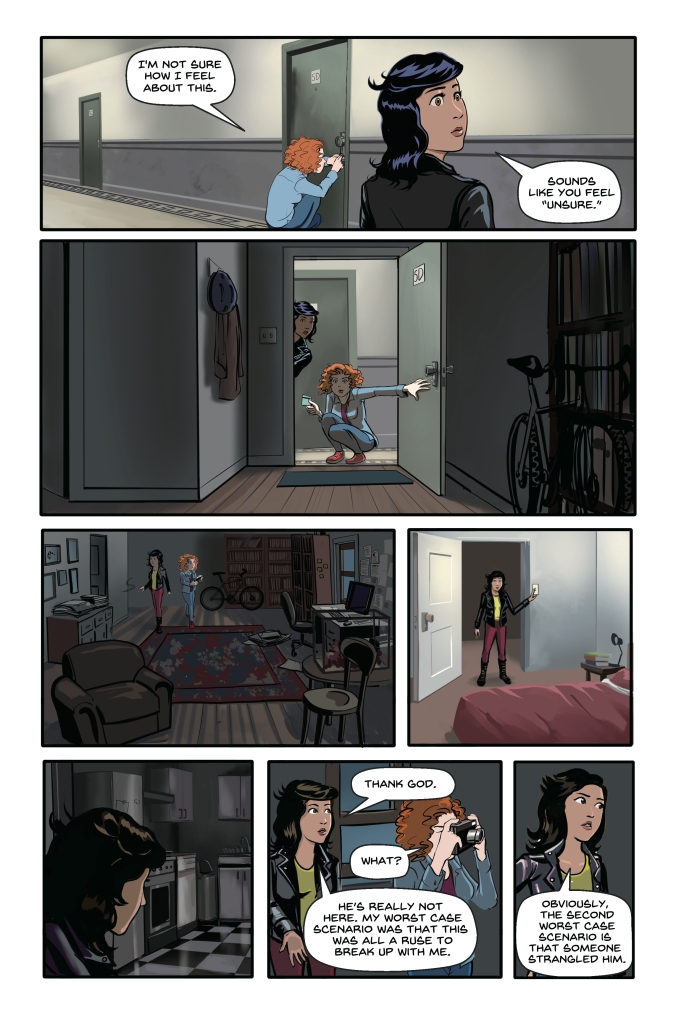 Eventually, the two worked back and forth and figured it out, producing a solid end product. Chandrasekaran would love to keep writing comics, he said. Shiozawa said he found the process of drawing a long-form comic to be enjoyable but difficult, so when he was done, he wanted a break from it.

“It’s brutal,” Shiozawa said. “You see these comic artists who are just kind of hunched over. They got back issues, carpal tunnel and all this stuff.”

He did very, very much enjoy it, though. There’s a certain rhythm you fall into that he loved, he said.

“I also can understand the addictive quality to it, because once you have so much momentum and [are] also thinking about so many things as you’re doing it, it’s very creative,” Shiozawa said. “As you’re creating, you’re creating other projects in your mind or other things in your mind. You just kind of keep that momentum.”

all images courtesy of chandrasekaran and shiozawa. you can check out their comic here.