As an adolescent, Max Clotfelter would make crude, extreme and offensive comics that alarmed the adults around him.

“I had a hard time making friends at school, so making these filthy, transgressive comics was a cheap way to get attention,” Clotfelter said in an interview with Sequential Stories.

Clotfelter, a 42-year-old based in Seattle, Washington, has been making mini-comics for anthology and self-published formats for many years now. In September of last year, he released Rooftop Stew, a collection of his eclectic short-form comics from the previous eight years or so.

A few years ago, Clotfelter self-published The Warlock Story, a 36-page miniature size comic about his troubled, peculiar youth featured in the 2018 edition of Best American Comics. In a desperate ploy for attention, a young, awkward Clotfelter would make gross comics with upsetting subject matter made with the sole purpose of being provocative and shocking.

“It’s humiliating now,” Clotfelter said, looking back. “There is hopefully a growth for a lot of people who try to be offensive for the sake of being offensive. I’m not saying that isn’t your right, your freedom of speech or whatever, but there are certain things that you need to tread lightly.”

Clotfelter had clear problems socializing and wasn’t happy. Eventually, authority figures at the school confiscated some of these comics and had him receive a psychological evaluation before returning to school. He spent two, eight-hour days at a doctor’s office talking to a counselor. He was told not to make any more of these comics when he returned, but he still did. They weren’t as offensive, and when he finished high school and started college, he moved on from making them. 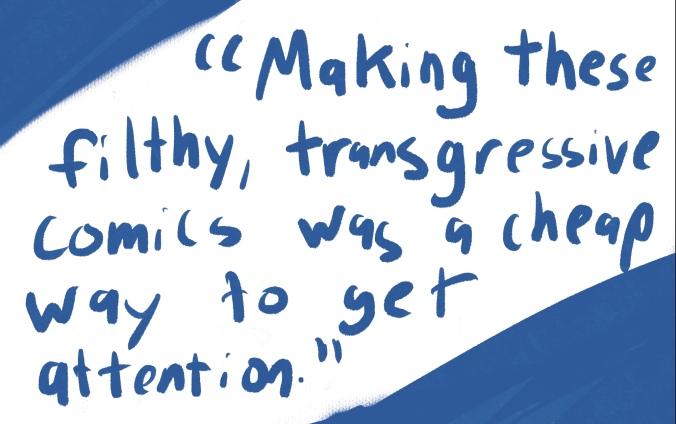 “It was… a failure from the public school system and my parents to recognize that they were dealing with somebody who [was crying out] for attention,” Clotfelter said. “Looking back, it’s like, ‘holy shit, I’m glad I was able to find a way out of that mindspace I was in to be drawing a lot of horrible cartoons like that.’”

In college, Clotfelter began to study illustration and sequential art, where he learned the nuts and bolts of how to create well-produced comics with value to them.

“There was a transitional period where I took that [style of being] really extreme and being gross and violent and offensive for the sake of just being offensive, and carried that over into being a little bit more polished, a little bit more professional,” Clotfelter said. “It was one of those awkward phases a 19, 20, 21-year-old goes through before you really discover your voice. Eventually, after a couple years at college, I realized that you have to tone certain things down to be taken seriously.”

When he was older, Clotfelter reprinted some of those old comics from his teen years in zines, but eventually decided to stop doing that.

“At that point too, am I still trying to make people laugh by these things that are incredibly offensive? And what’s the value in that?” Clotfelter said. “So then at some point I was like, this isn’t benefiting anybody in any way.”

Clotfelter’s current comics work uses a unique scraggly and quirky style. Many of his comics are blunt and darkly comedic. Some star a character named Redeye, a sort of innocent and cute monster who stumbles into sad and weird situations. Others take place in disturbing dystopias. And then plenty of others delve into funny anecdotes from his youth, treading sometimes morose subject matter, like his parent’s divorce, but in ways that find humor.

Clotfelter does customer service and other administrative work for Fantagraphics full-time, making his own comics when he finds the time and the drive. These days, he dives into whatever work he’s in the mood for and uses the professional, smart mindset he’s developed over the years to create short-form comics of which he can be proud.

“That’s just kind of what I do. I don’t have any grand ambition to do a graphic novel or anything. Those take too long,” Clotfelter said. “Maybe I’m just more of a short-story writer than a novelist.”

images courtesy of max clotfelter. you can purchase his book here.

if you enjoyed this post, please consider supporting the blog’s independent comics journalism by contributing to its patreon page, here.

update, july 15, 2:30 PM: i edited two of the quotes here, in brackets, for clarity. i also swapped out the instagram link with a link to purchase rooftop stew.