“I just kind of had this moment where I was like: ‘What am I doing? I’m about to graduate, and I didn’t even try comics,’” Conway said.

With the help of that class, she came up with the pitch for The Lab, her haunting, wordless debut graphic novel about exploitation, which was released this year and published by Top Shelf Productions. 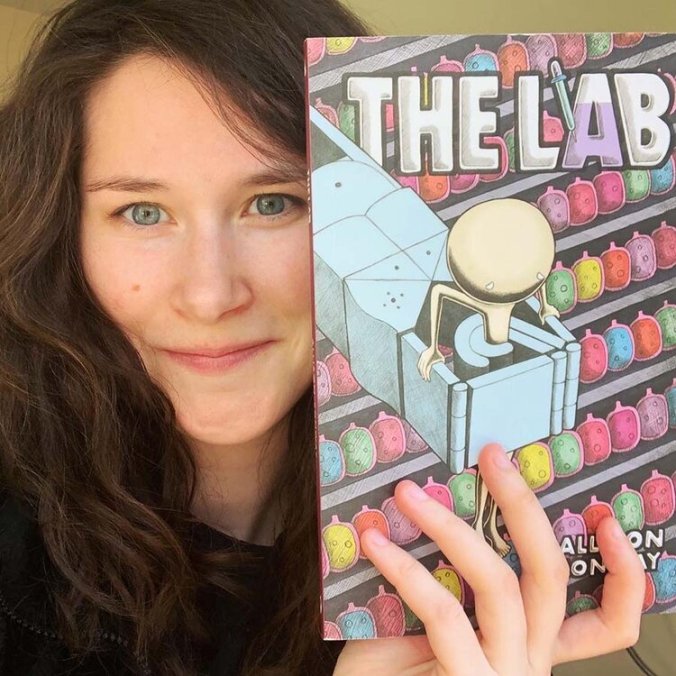 Conway, 26, a Brooklyn resident, has worked professionally in illustration and comics for years. She’s done illustrations accompanying articles for newspapers like The New York Times and The Wall Street Journal and also completed other illustration work for clients like Yale University. She started a web comic published in Vice in 2016 about a pillbug.

The Lab represents Conway’s first stab at long-form comic book storytelling, and it’s no pamphlet, clocking in at 176 full-color pages.

The Lab follows an unnamed, simply-drawn humanoid figure trapped in a lab, subjected to tortuous experimentation along with many, many others. The story progresses without any dialogue or narration but with lots of upsetting drawings depicting the protagonist’s abuse.

It’s disturbing. In an early sequence, the protagonist’s eye profusely bleeds after various liquids are dropped into it. He’s given an unappetizing-looking serving of food to eat, but he ignores it and cries himself to sleep. This scene, like others, is followed by pages of nothing but harrowing, enveloping black cross hatching.

Conway describes her artwork, which she hand-draws with a ballpoint pen and colors digitally, as cartoony but detailed. 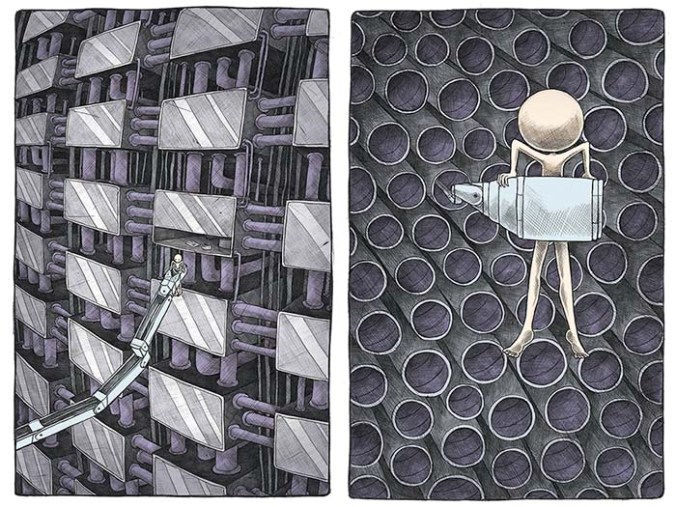 Much of the comic has a muted color pallet, but the comic also features vivid injections of color. Robotic arms grab the test subjects and inject them with mysterious, colorful liquids. This creates interesting imagery, as Conway said.

“He’ll be in this really gray, nondescript environment, and then the times that you see color, which is positive and fun, will be when he’s actually being tortured and tested on,” Conway said.

Conway thought a lot about animal testing when developing the comic’s themes, but the book’s plot and imagery are vague, mysterious and abstract enough to speak to oppression and exploitation more broadly.

“I tried really hard to have it not be just about that,” Conway said, “because I got thinking about exploitation in general and wanting to do a story that I was hoping wasn’t preachy but was just sort of thinking about ‘what is the point of treating this creature or person or animal a certain way?’”

Conway found that creating The Lab provided an outlet for the disgust animal testing made her feel.

“I guess it did probably start out angry, just sort of angry at the world,” Conway said. “Besides trying to buy vegan products and non-animal-tested products and changing the way I purchased things, I didn’t really know what to do. You can write to your congressman and people and try to share the message, but then I was like, I think making art is a good way to do it.”

While she still works in standard illustration, Conway has embraced comics-making. It all goes back to that college course.

“It was in that class that I realized comics I can tell a story with, and I can do that with illustration, but with one image,” Conway said, “there’s really only so much you can say.”

all images courtesy of allison conway. you can find her website here.

if you enjoyed this post, please consider supporting the blog by contributing to its patreon page, available here.